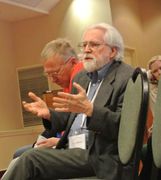 A. Beginnings and Early Years

The chief visionary in founding Collegium was James Luther Adams, whose commitment to Unitarian and then UU scholarship was long evident in his own teaching career and his leading role in founding the Greenfield Group, based on his conviction of the need for ministers, after graduation from seminary, to maintain intellectual vitality through disciplined common reading, study, and dialogue.  Over many decades the Greenfield Group provided the model for more than a dozen UU regional ministerial study groups.

In the early 1970s, JLA was similarly moved to suggest the idea of Collegium by his having observed two kinds of fragmentation among scholars whose work might be more fruitfully focused on the intellectual life of the UU movement. First was the discernment of three, often mutually disengaged constituencies: (1) UU ministers who were writing both as members of study groups and as independent researchers; (2) UU seminary students and faculty; and (3) UU faculty and graduate students in the secular academy.  A second kind of fragmentation was observed among UU academics, whose scholarly conversational circles were typically limited to colleagues in their own specialized disciplinary societies (history, philosophy, sociology, religion, etc.), yet some of whose work in these disciplines might more meaningfully contribute to liberal religious life if there were a forum for gathering and reflecting on that work in an intentionally ecclesial context.  From these insights, and with the active involvement of others (Peter Kaufman, Larry Axel, Gene Reeves, David Johnson, et al.), Collegium was organized to encourage dialogue and sharing of relevant scholarship under an umbrella or rubric of “liberal religious studies.”

In the first decade (1975-85), substantial Veatch funding encouraged a fairly good mix of clergy, UU laypeople in secular universities, and seminary faculty, annual meetings attended by 40-50, with separate parallel sections in ethics, theology, and history, and two volumes of published proceedings.  In some instances, sections would pursue thematic emphases over several years, encouraging papers that would expand on or respond to those of earlier years and create ongoing dialogues of exploration and counterpoint.

B. The Middle Years

In the mid-1980s, circumstances changed in two major ways:  the Veatch subsidy dried up, and the formation of the Highlands Institute for American Religious and Philosophical Thought (www.iarpt.org) effectively raided a significant segment of Collegium’s membership.  As a result, annual participation dropped, membership leaned more heavily toward the ministerial constituency, many felt that there was a decline in the quality of programming, and support for proceedings publications lapsed.

The original idea behind an annual distinguished scholar was that he or she would be a long-time member of Collegium—one of “our own”—someone whom we honored for longevity of collegiality and whose presentation would be a retrospective reflection on the enduring and guiding themes of a lifetime of scholarship—a sort of intellectual odyssey.  With membership decline in the later 1980s and through the 1990s, we had mostly “run through” our list of internal candidates meeting these criteria.  We therefore began looking outside our group and more to “guest” scholars who were generally within the orbit of liberal religious studies, often younger people still in their prime years of scholarly productivity, but without any prior association with Collegium.  This shift was also intended to provide a “draw” for attracting newer members, but the effect, with a few exceptions, was that those so drawn tended to register just in years of specific interest and without much commitment to ongoing membership or interest in institutional leadership.  Collegium’s leadership and ongoing core membership then and to the present day (2014) has remained at a level of 10-15.

C. The Past Ten Years

With these challenges in mind, Collegium’s executive committee held a one-and-a-half-day consultation following the UUA General Assembly in 2005.  As the report of the consultation shows, participants were reluctant to downsize the vision of the organization.  Indeed, there was a mood of renewed determination and strategizing about future membership.  That determination has not resulted in significant membership growth, and annual participation numbers have remained in the range 20-25, though with some changes, including few enough papers that the sub-sectional program structure has been dropped in favor of only plenary presentations.

Since 2007, four factors, partly external to Collegium, have had significant impacts on the group’s position, role, and connections within the larger world of UU scholarship.

The history of Collegium is still being written. Seeking to sustain Collegium in the 21st century, a group of long-time and new members are working together to envision how to make this happen.  This is a work-in-progress and you are invited to join the discussion by becoming a member, contacting a member of the executive team, attending the next conference, or joining the discussion on this site.

As James Luther Adams noticed forty years ago, there is still a need to bring together scholars in different contexts and stages. Collegium strives to continue to be a community that nurtures vital intellectual conversation about Unitarian Universalism.